In Search of Monet’s Water Lilies in Giverny

I first became aware of Claude Monet as a freshman in college when I walked into a friend’s dorm room one day and there above her bed was a poster like none I had ever seen before; a bridge with water lilies.

‘The Waterlily Pond with the Japanese Bridge’ by Claude Monet

The painting was surrounded by a thick green border with ‘Claude Monet’ written in large capital letters.  Despite the small size of the picture relative to the size of the poster something inside me shifted that day and I started asking questions.  Where did she get this?  Who is Claude Monet?  What else has he done?

It turns out my friend had visited Giverny with her parents the previous year and so the poster.  One look at it and I knew I wanted to learn more about Monet and his style of painting called Impressionism.  Within a week I had visited the college bookstore and was the proud owner of my very own Monet poster.

Of course mine had to be sightly different – no bridge and a big blue border – but I loved it and there was many a time while studying I would look at the poster and it would bring me calm and focus.

A few years later I had the opportunity to study in France for a year.  Unfortunately, I never got to Giverny since there were so many other things to do in and near Aix-en-Provence.  Still, Monet and his water lilies remained with me no matter where I went and what I learned.

Decades later I was part of a large group of family and friends heading to the Normandy D-day beaches with a stop in Rouen.  Since I was the driver of one of the cars I let it be known that MY car was doing a day trip to Giverny and whoever wanted to come along was welcome to hop into the car with me.  Everyone else could explore Rouen or whatever.

While I would have been hard-pressed to articulate the importance of Monet in my life there must have been something in my tone that sparked interest because the next day TWO carloads drove from Rouen to Giverny to look at waterlilies.

Claude Monet is often considered the grandfather of Impressionism and is more widely known for his waterlily paintings even though he has also painted other subjects like the Rouen Cathedral and haystacks in a field.  What’s so special about haystacks?  He painted them at various times of day so while each painting would show the same cathedral or haystacks each would also be different due to the different quality of light at various times of day.

The house and gardens Monet painted in for nearly 40 years are kept today as they were in his lifetime and available for viewing by any who are interested.  Visitors can start off by entering his house and touring the rooms where many of the original furnishings and of course LOTS of painting are there as if Monet and his family went out for a few hours and will be back at any moment.

Once you walk through the house you can then explore the many flowers and trees in the back garden: 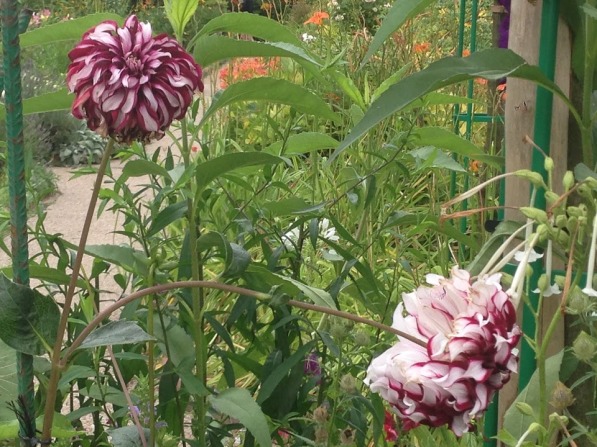 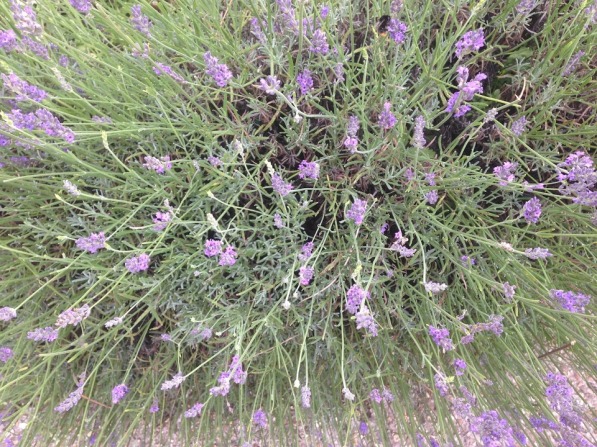 I  had decided to enjoy the garden a bit more on my way back in since I knew what I was looking for – that green bridge over the water lilies.

The bridge. When are all these people getting off it?

Of course it looks nothing like the painting today – well, perhaps if you got into a boat and painted from the water.  In addition you have to share the beauty with hundreds of other visitors a day.

Today it’s slightly unfashionable to be a fan of Impressionism since it’s nearly everywhere you look from drink coasters to aprons.  You can even get the waterlilies from one of my posters printed onto an umbrella. (Yes, of course I own one of those!) Still, visiting Giverny in person after being inspired by Monet during that first week of college was like visiting the person I used to be. I’ve been fortunate enough to visit many places and hope to visit many more yet this was the place that inspired me to start exploring.

And I use that water lily umbrella proudly!