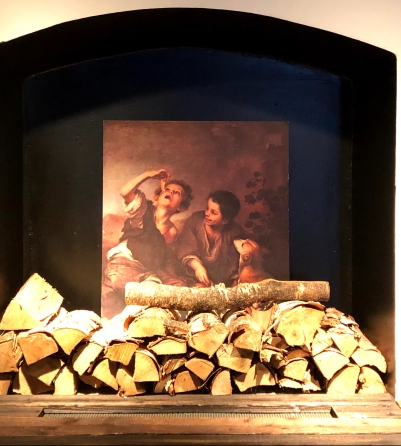 We came to Norway in September expecting fjords, a bit of rain and the northern lights.  Well, there were definitely fjords as well as a bit more rain than expected and no northern lights BUT there was also an amazing food tour in the city of Bergen.

Our tour started at the outdoor food market.  We got there a little early which gave us time to ogle the food stalls.

Our first stop after meeting up with Rachele from Bergen Food Tours and the rest of our group was the famous Fjeliskâl Fisketorget seafood restaurant/market.  There we enjoyed a sampler plate of the following:

Yes, you read that right. We tried whale – apparently minke is not endangered and so legal to eat.  It was kind of like steak but steak is much better.  The favorite was the Gravlaks.  After the tour we went back and bought enough for four of us to eat for two nights.  Yum!

Our next stop was Trekroneren – a street stand where we tried reindeer sausage with lingonberry jam and crispy onions (mustard optional).  With apologies to ‘Rudolph the Reindeer’ this was also delicious. 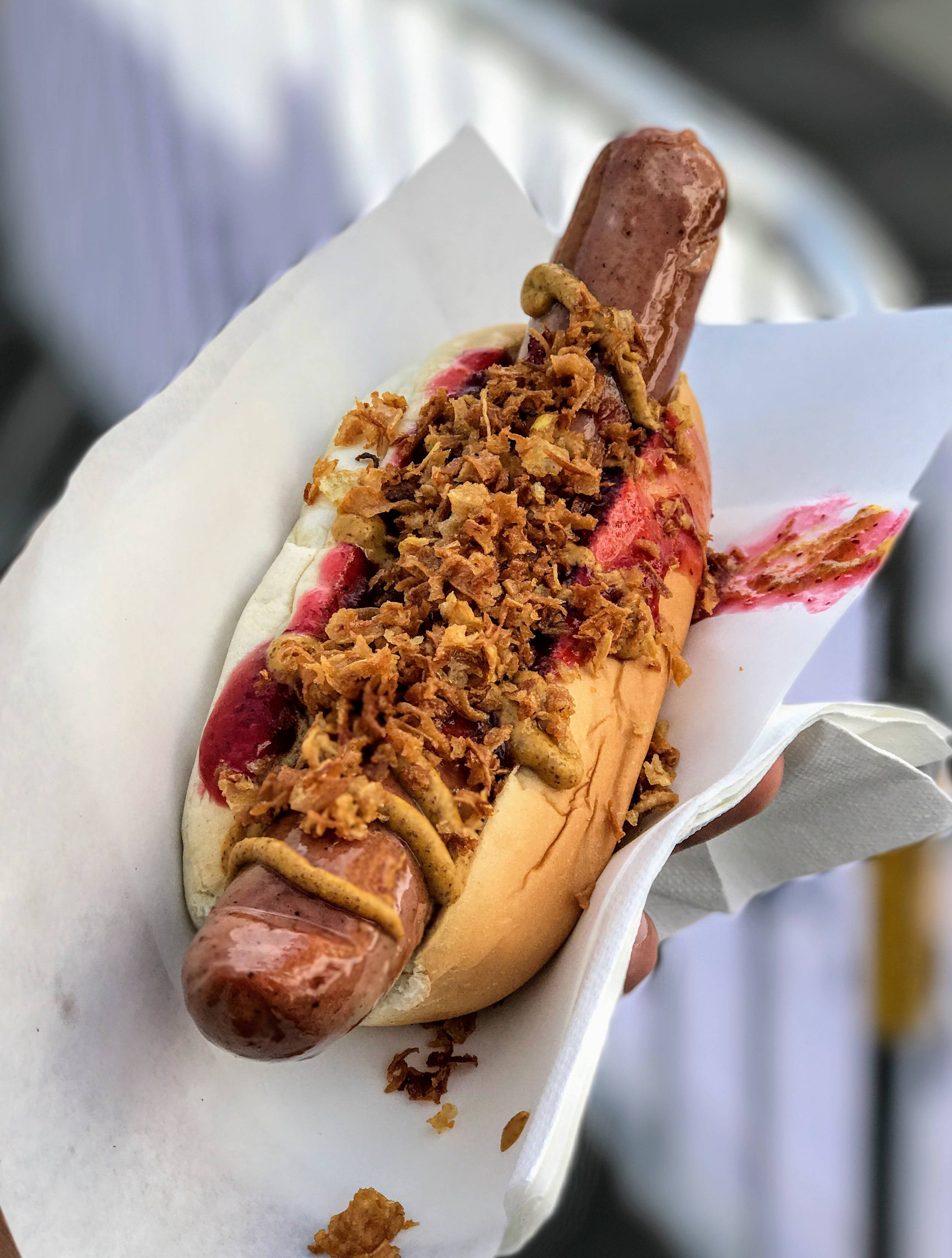 Next our guide Rachele took us to her favorite Bergen restaurant called Bare Westland (Only West-land) where we tried their version of the Norwegian traditional dish called Plukkfisk. 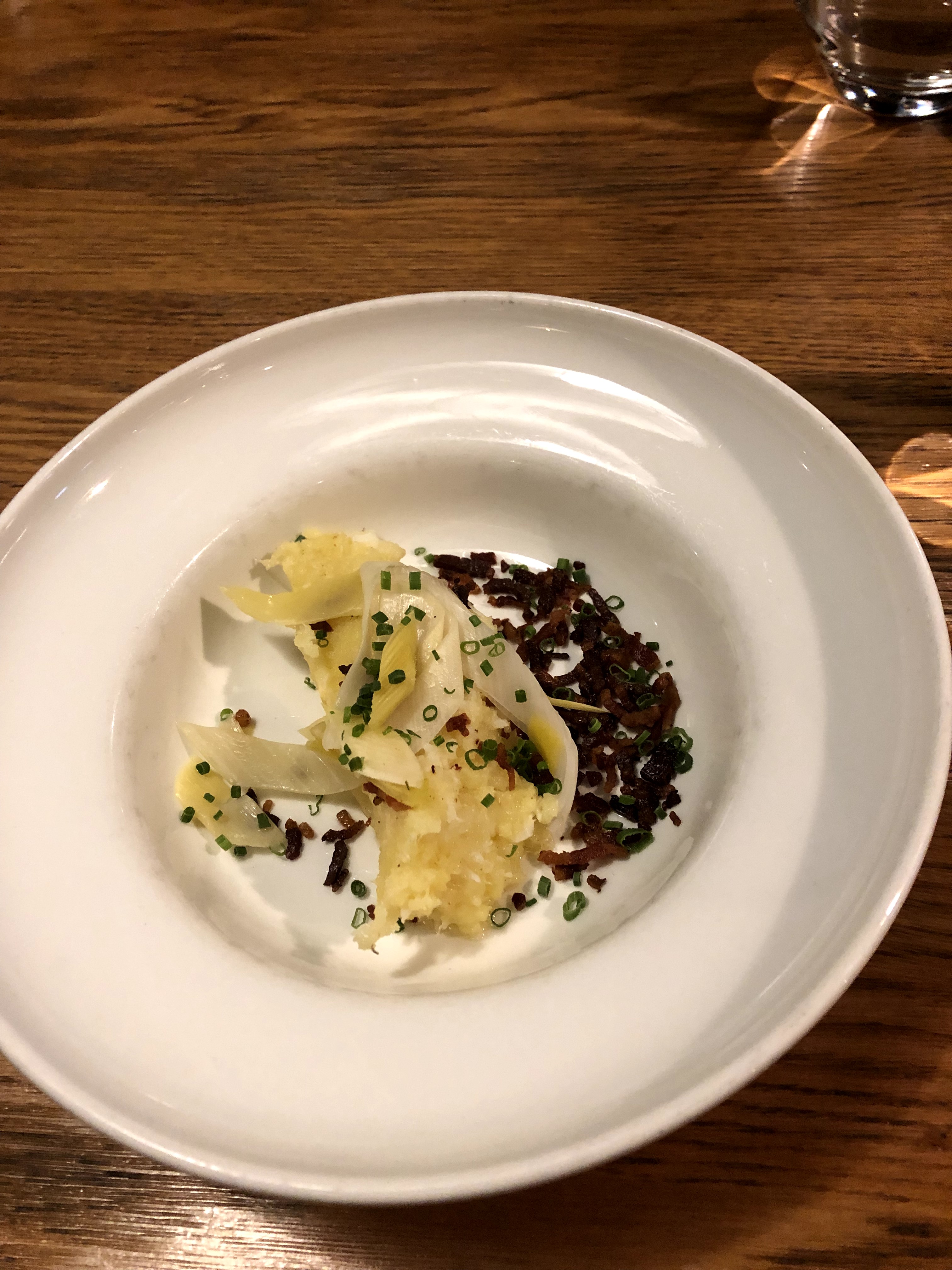 Plukkfisk or ‘plucking fish’ is white fish mixed in with potato.  The twist on this version is the addition of pickled leeks and bacon.  The recipe was the owner’s grandmother’s and not given out but after the tour Rachele sent out an email with all the tour details including three other recipes which together should approximate this one.  I’m looking forward to trying it out this winter.  Minnesota should be a good place for it!

Bare Hagelin also allowed me to indulge my interest in wall art: 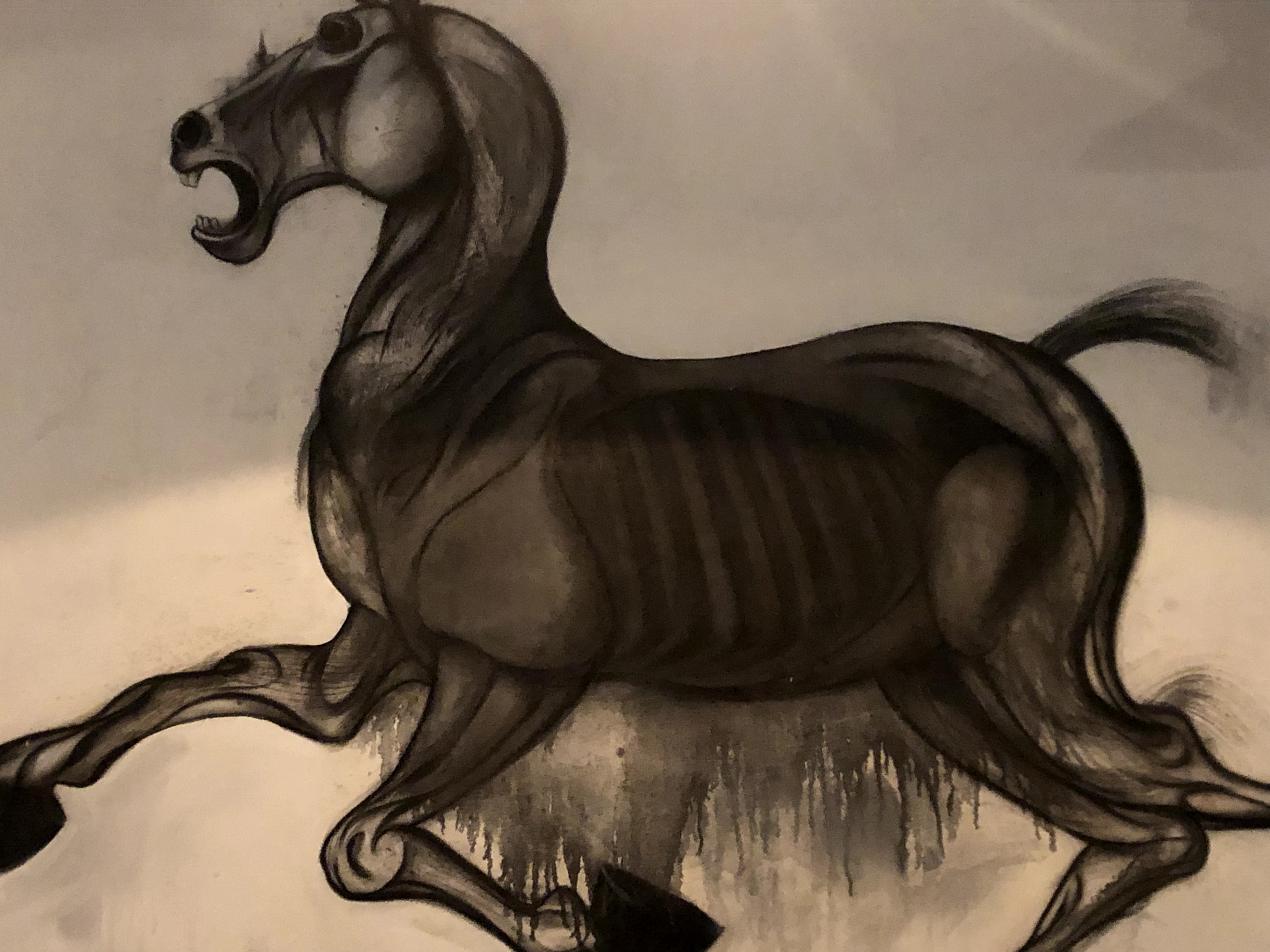 Our next stop was at the Søstrene Hagelin rotisserie where we sampled a few of their famous recipes: Bergen Fish Soup, Haddock Fish Cakes, Bacalhau (salted cod) and their version of Plukkfisk containing a bit more fish and butter.  It was heartier than the Bare Westland version.

By this time we were ready for dessert so headed over to Sweet Rain Konditori where we sampled some cheese cake made from brown cheese (the friend who had been trying to get me to eat brown cheese the entire trip enjoyed the moment) along with a brunost cookie with blueberry jam. 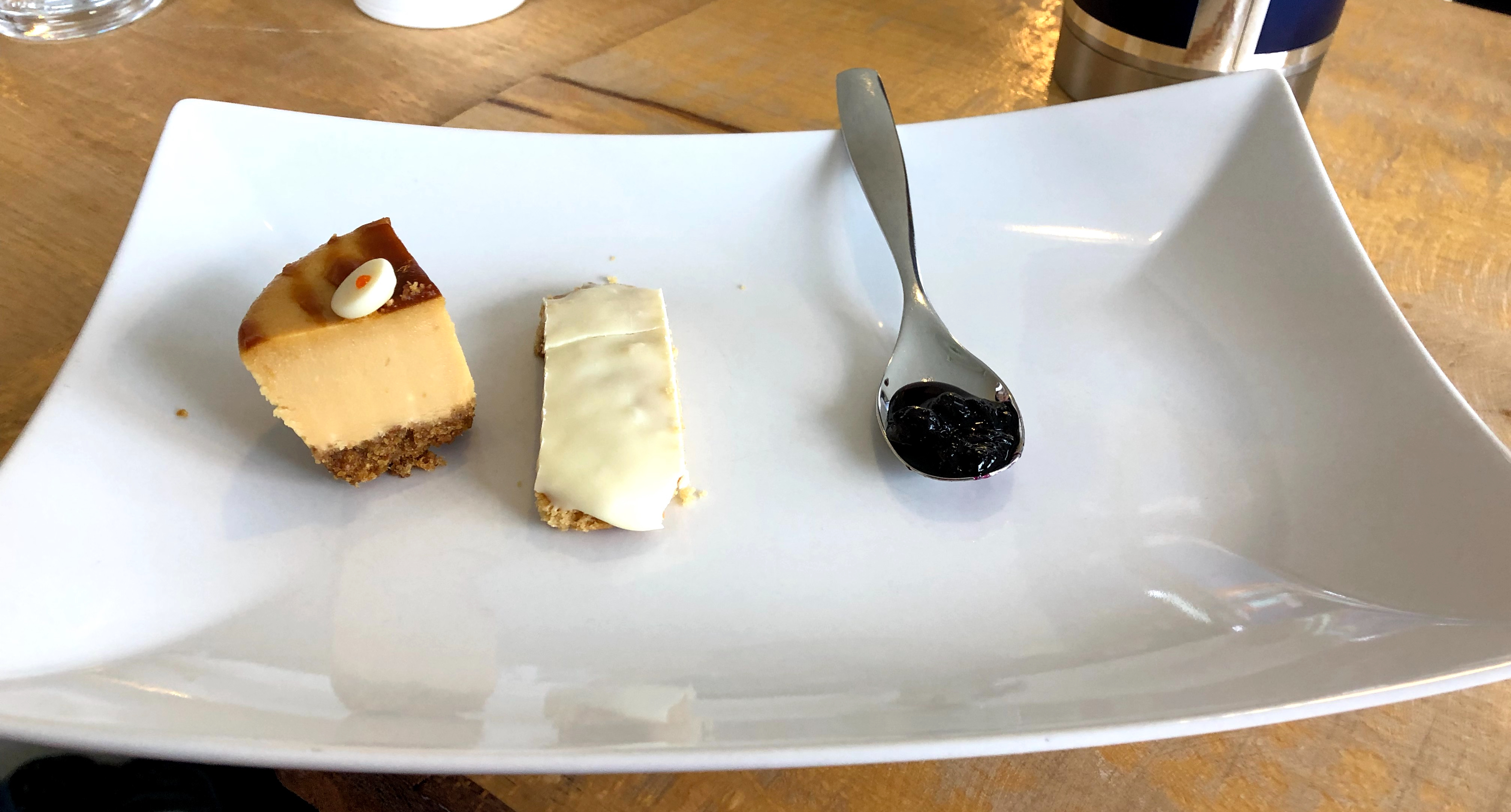 With the tastings and walking around we had worked up quite a thirst just in time for the tour finale back at the market – a local beer or Akevitt (Aquavit) tasting.  Participants chose which option ahead of time.  I had gone for the craft beer option.  The brewery was Lokalt&Lekkert.  We sampled a saison, an IPA, and a citrus Pilsner.  I’m not much for hoppy beers and the selections seemed a bit summery for the weather that day but I’m sure my hoppy beer friends would have really enjoyed it.  Those that chose the Akevitt taking were quite happy.

After the tour we headed back to Sweet Rain for some coffee and to pick up the beautiful cake and pastry my lovely friends had ordered for my birthday. 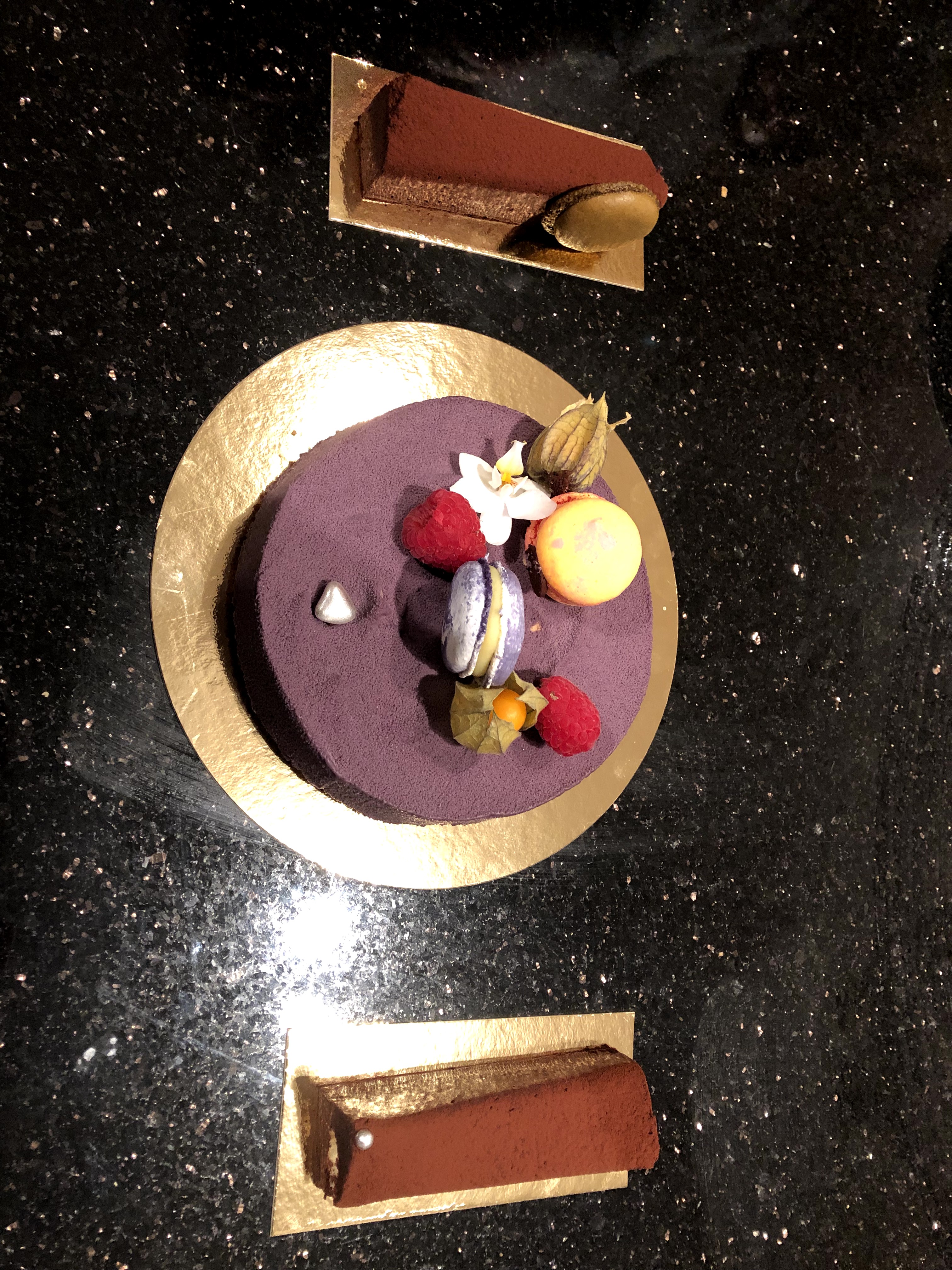 Along with our smoked salmon, good fresh bread, marinated vegetables and a few other treats we were quite content for the remainder of our Bergen stay! As Rachele would say: ‘Keep on nomming!’